When I started this blog, it was my aim to keep it as apolitical as possible: a decision that has has been quite difficult to maintain with all of the disability rights issues that are at the forefront of a lot of some very harsh government policies, in the UK.

But, just for today, I’m changing my mind.

Those of you who read my blog regularly will know that I have a HUGE issue with physical illnesses being treated as though they are purely psychological.  This tends to occur when organisations are tardy in catching up on the latest research or are dealing with a rare disorder for which they need more ‘proof’ of existence.  In addition, in the UK every treatment has to be evidenced based; which is great for the most obvious illness like certain cancers, but not so great for complex conditions that create ‘cascade failures’ across multiple systems. So, even if 20,000 patients are making the same statement until there is some kind of empirical evidence, those statements will always be treated as anecdotal. I want to show you why this can be terribly problematic.

Back in the 1990s, the son of a family friend was diagnosed with Schizophrenia. He fit all the criteria for a typical sufferer, right down to his social demographic, and all the evidence presented at the time seemed to point to some kind of psychotic break – there was, after all, no doubt that he was suffering hallucinations alongside inexplicable mood swings.

A treatment programme began, involving various anti-psychotic medicines.  He was in and out of psychiatric wards and residential homes.  His physical health deteriorated. His loved ones fretted.  But nothing the doctors were doing seemed to help stabilise him in any way, shape, or form.  None of the drug combination alleviated the symptoms that had led his parents to seek help for him in the first instance.

That is until, a few years into having various pills shoved into his system, some bright spark had the foresight to do a simple blood test.  As it turned out, the Schizophrenia that had seemed so evidential was actually the physical condition Diabetes.  Because his blood sugar levels were not being managed he would show signs of a depressive disorder when his levels were high and delusional thinking coupled with hallucinations when the levels dropped dangerously low.

Well, at least they spotted what was really wrong with him in time to fix it, right?

I would like to tell you that this story has a happy ending; that once he received the correct treatment for the illness that he actually had he went on to regain control of his life, eventually making up for the years he lost to misdiagnosis. I would like to tell you that, but I can’t.  I can’t because Diabetes ravages the human body, and many anti-psychotic medications play havoc with blood sugar levels. The moment he was crowned with the barbed laurel of mental illness he was in a no-win situation.

The cloud that came wrapped around that tarnished silver lining was kidney failure; so he merely left the psychiatric ward to head straight to the dialysis centre, as doctors tried to keep him alive long enough to find a suitable donor.

This man, who’d had some of the best years of his life destroyed by a simple failure to check for an obvious physical cause for his illness, died just before Christmas 2015 at the age of thirty-nine.

In the summer, before he passed, I told a medical student (now a qualified doctor) friend of mine about how certain assumptions had led to him barely holding on to life, and she assured me that the training had changed – that blood sugar levels are now checked on everybody who presents with symptoms of psychosis.  But what happens when a case involves an illness that isn’t as widespread, or widely understood, as Diabetes?

If you’re wondering where the political point is; it’s here.  I am writing this as a call to action for a young girl who finds herself in a similar position to the man who didn’t live to see his fortieth birthday.

Bethanie is a thirteen-year-old who suffers from Ehlers Danlos Syndrome.  However, she is being treated as a psychiatric in-patient (basically, she cannot go home without the permission of the hospital) because some of the doctors believe she actually has a somatoform disorder. The reason they believe this is because of ‘inconsistencies’ in Bethanie’s symptoms: what they actually mean when they say this is that they don’t believe that fluctuating illnesses truly fluctuate. As someone who has essentially lived in three different bodies since last Sunday, this attitude really, really grates on my nerves.

I have trouble coping with this level of dismissal as a grown woman – I can barely imagine what it must be like to feel so voiceless as a child.  A child who is already dealing with the consequences of having a life-altering genetic disorder.  So I am here to ask for a tiny piece of help for that child. Just a minute of your time to sign a petition and pass it on. That’s all.

By doing this, not only can we help Bethanie to get the correct treatment for her actual illness, we can also help change attitudes to complicated and poorly understood medical conditions, and perhaps prevent girls and boys, women and men from having to suffer the same ordeal in the future. 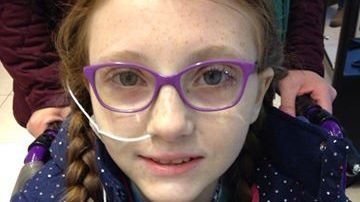