One afternoon in December 2012, I heard somebody thumping on my front door.  The building is not the easiest to get into, so I assumed it was one of my neighbours in distress. I grabbed my keys, and opened the door to spot, not a panicked neighbour but an innocuous, yet unfamiliar looking young woman.

“Are you Jacqueline?” She asked.

“I’m from the Doctor’s Surgery. We’ve been trying to call you.  You need to get a blood transfusion ASAP.” She handed me a referral letter to take to the hospital.

Allow me to add some perspective to that conversation.  I have Endometriosis, an inflammatory illness that causes womb tissue to grow in all manner of unwelcome places, which then proceeds to create a tonne of internal bleeding.  The last treatment I had taken for this (Norethisterone) had been creating the kind of liver damage usually seen in the early days of alcoholism: so I stopped taking it and stepped away from all medical intervention for a little while.  This, however, led to my periods returning to their unbelievably heavy state.  The excessive blood loss was the reason I had returned to the doctor earlier in the week – heart palpitations had led me to believe that my blood count was a little on the low side.  I hadn’t even expected the results to be available for another five days, so the urgency with which the practice acted left me feeling panicked and a tad dazed.  I gave away my shift for that evening and headed to the nearest hospital.  The luxury of hindsight has made me realise that I should have allowed the ‘drama’ to settle before rushing out of my home.

I had two long ‘blood replacement’ sessions over as many days.  During that time a good few  members of hospital staff (most of whom were really lovely people) told me that I would start to feel better immediately.  The only problem was that I didn’t – in fact, I felt a little bit worse.  However, because the heart palpitations had subsided, I rationalised the dreadful way I was feeling by telling myself that maybe ‘immediately’ really meant ‘in a few days’.  But a few days, and eventually a few weeks, passed and I was feeling worse than I had ever felt in my entire life.  It was the Winter Festival at the theatre where I was working and, due to most of the shows being geared towards children, the shifts were incredibly short (like three hours short).  Even so, I found myself less and less able to stand to more than a few minutes at a time.  My entire body would quake with exhaustion and I always felt as though the worst ever case of influenza was on the verge of exploding out of me.

I struggled on for as long as I could whilst becoming a flea in the ear of my doctor, as I constantly tried to explain to him that what I was experiencing was not an ‘added extra’ of Endometriosis – something else was going on.  He eventually started to sign me off work for four-week chunks at a time, without any further investigation.  The explanations on the Fit Notes often revealed what he thought was wrong, regardless of my actual symptoms – but by that point, I was way too exhausted to care.  I was deep in the mire of, what I would eventually call, my Year Of Hell. 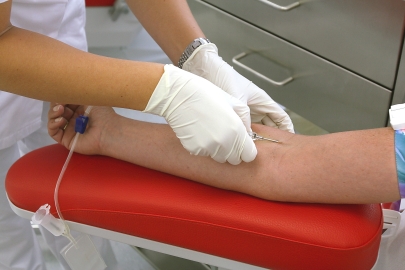 I would, more often than not, wake up feeling like the Wicked Witch of the East – crushed under a house that I didn’t see falling out of the sky.  My personal goals shrank to the point where getting from my bed to the living room sofa was considered a major achievement; and my daily choices mostly consisted of deciding what I had more energy for – showering or preparing a meal. (For the record, I would often choose cleanliness, as I loathe feeling grody, and just eat raw fruit and veg until my husband got home from work…) As travelling for more than five minutes felt like a trip to the top of Everest, it became easier to travel with the security of a chaperone.  I would have been well on my way to becoming housebound had it not been for this one outlying factor: Ice Hockey.

Before the full impact of my body’s bizarre reaction to the blood transfusion had taken hold, fully, I along with my husband and sister, had started watching our local team, the Streatham ‘Redhawks’ Ice Hockey Club, on a regular basis.  Our first game was on my husband’s birthday: he turned blue from the cold, my sister drank copious amounts of hot coffee, but I was like a Meerkat on amphetamines.  I had never seen a sport played so fast and with so much energy, ever.  Everything about the sport thrilled me, from the speed of the skating to the sound of the sticks on the ice.  My excitement level went through the roof and, even though I have no proof of this, I’m sure my pupils transformed into pulsating love hearts at least once.  Do I remember the score?  Hell, I don’t even remember who the opposing team were.  What I do remember is the very distinct feeling of being ‘inside joy’.

A pattern soon started to emerge: this amazing sport was giving me a much-needed boost of energy.  I was by no means feeling well, but I was feeling well enough to claw back some of the choices that had been in danger of becoming distant memories.  Even if they lost I would still get a 36 to 48-hour boost where I could do housework, start or finish creative projects or go to the cinema by myself.  I would always crash horribly by the middle of the week, but that was okay because I had ‘lived’ for almost three days and I had more Ice Hockey to rejuvenate me coming up at the weekend. This was so much more than s sport to me – it was a lifeline. Unfortunately, an unexpected change at work was about to put that lifeline under threat.

In the spring of 2015, my colleagues and I were told that the organisation we worked for was restructuring our department.  There were going to be some, hopefully, voluntary redundancies as well as some sweeping changes to our contracts.  The redundancies were expected as planned renovations meant there was simply going to less work to be done.  It was the changes to the contract that blindsided a lot of us.  It certainly blindsided me.  I was feeling exhausted, as always, so I was only partly paying attention to what the middle manager was saying until he dropped the bombshell.  The part time job I had been working for years was about to become completely weekend-centric, with shifts being allocated by the needs of the corporation rather than by the structure of the lives of the staff.  In addition, those shifts could start at any time of the day, from 9am to early evening: the business was going to dictate when our free time actually occurred.  My first thought, loud and agitated was “HOCKEY!”  There was no “What about…” or “How will I…”, it was just that one word emblazoned across my mind.  The fact that a few 9am starts were more likely to kill me than missing a few Ice Hockey fixtures actually took a few days to sink in.  It was a revelation and a realisation of what the term ‘self-care’ actually meant for me.

For someone already living a life of general wellness, snuggling in a duvet with a heated, scented pillow can seem like a luxury; but for people like me, something like that is just a part of our everyday existence.

The images and attitudes that are often associated with self-care often include pictures of perceived calmness: meditative yoga poses, sunflowers, butterflies and beautiful, big green trees.   There are so many positive messages centred around ‘walking in nature’, ‘taking time to breathe’  and ‘hugs’ that it’s very easy to forget that self-care comes in many hues.  For someone already living a life of general wellness, snuggling in a duvet with a heated, scented pillow can seem like a luxury; but for people like me, something like that is just a part of our everyday existence.  The ability to get out from under the duvet is what a lot of us crave and miss.  The sport I was so enamoured with was exactly what was rescuing me from being bed-ridden; and the fear of losing that, even a little, was visceral.  I had to make a decision.

Despite society’s attitudes towards those who are not in paid employment, it seemed clear to me that, without the regular boosts from watching Hockey, I could soon find myself unable to replenish my energy enough to be any kind of productive worker.  I took the redundancy package.  That may seem like an insane decision to make, particularly in this economic climate, but I was sure that this was what I needed to do to ensure that I was taking care of myself in the long term.  Three months after saying goodbye to my paid job (I still do voluntary work on a regular basis) I was diagnosed with Fibromyalgia, a condition that causes widespread pain and extreme fatigue.  So it turned out that I was right about something ‘piggy-backing’ on the Endometriosis (the battle for that diagnosis will be another post in itself) which merely reinforced the idea that I made the right decision.

What am I going to do when the redundancy money runs out?  To be honest, I’m not sure.  At this point, I’m not even sure what my long term treatment is going to consist of.  What I am sure of, though, is what ‘self-care’ looks like to me – and that is a South London Ice Hockey team.

4 thoughts on “What Does Self Care Actually Look Like?”