Fibromyalgia is a complicated and challenging syndrome, and living with it is something that I’m having to learn through a fair amount of trial and error.  There are things that I thought, for years, were my body’s own ‘quirks’, that turned out to be quite well-known symptoms; but, simultaneously, it appears that every sufferer is a unique case.  This poses a very obvious problem for patients, who will have to learn what their bodies are doing, and why they’re doing it: but it also poses a problem for physicians as a treatment that’s good for the Goose could actually be disastrous for the Gander.  Initially, I believed this was why, after my initial diagnosis, I was immediately discharged from the Rheumatology clinic and left to my own devices.  (I wasn’t exactly thrown to the wolves; I was put on a waiting list for a pain clinic assessment at the end of last year, but there’s no guarantee that they will accept me as a patient.)  On the other hand, being left in treatment limbo may have less to do with the clinician who diagnosed me and more to do with the findings of more and more research.  Rheumatology is a muscular-skeletal and autoimmune speciality, but a vast amount of evidence suggests that Fibromyalgia is a neurological condition: it really is all in our heads, but not in the way some overly dismissive people would have us believe.  And, most importantly, it gives me a finer explanation as to why watching Ice Hockey sends me into temporary remission.  Allow me to expand a little on that last sentence…

My husband and I were working on a joint project and having a ’strong difference of opinion’ about some of the finer details.  I had received no respite from fatigue that day, and all I wanted to do was collapse into bed.  My own stubbornness regarding the project forced me to try and disregard how dreadful I was feeling, just so I could keep an eye on the direction it was going in.  By the time we arrived at a highly charged consensus, I knew I had pushed my body’s boundaries too far; but I reasoned that there was nothing left to do that night but sleep.  Unfortunately, despite being right about the project, I was wrong about they night being over.

My nervous system was going into some kind of meltdown

While I was brushing my teeth I felt an all too familiar sensation in my forehead.  A scrunched up bundle of toilet tissue was put to my face just as the blood started trickling out of my right nostril (it’s always the right nostril).  A gentle blow into the white paper told me that I was dealing with one of the more serious nosebleeds – the ones that had to be waited out.  So I waited – exhausted, head down and nose covered, until I believed that the worst of it was over.  With the remnants blocking my airways, I plopped my head down on the pillow.  Less than a few minutes later I felt the irritating drip in the back of my throat.  I got up, sending droplets of blood splashing onto the bedroom carpet, and returned to the uncomfortable, makeshift seat that was the edge of the bath.  More tissue.  More waiting.  When I was POSITIVE that my brain had truly stopped trying to escape through a hole in my face, I returned to bed.  The only problem was that my nervous system was going into some kind of meltdown, stopping my bone-weary body from obeying the order to sleep.  I’m no stranger to insomnia, and even though I always take sleep medication, there are times when some kind of internal override switch renders any drugs impotent.  But, for me, insomnia was always something that started ‘from the eyes, up’ – a head full of chatter, music and imagery: this night was different.

Bodily pain be damned, I knew I had to stop those tears.  I had to find a ‘happy place’ and park my mind right in it.

My right thigh started to tense, but not in a way that suggested a cramp was to follow.   It felt, instead, like my leg was in the process of climbing a staircase, but holding the foot in mid-air, above the next step.  Muscle spasms do occur with Fibromyalgia (and I’d had my fair share before I knew what I was dealing with) but this one was so persistent.  There was no position I could move into that would encourage my thigh to ‘let go’.  It refused to respond to massage or stretching, so I attempted to use some basic meditation to try and create some sort of tangible relaxation in my body.  Trying to focus on my breathing was an instant fools game, as all I kept thinking was how desperate I was to avoid another nose bleed.  I lay on my back, feeling the pain radiating from my confused leg, literally whispering to myself “What should I do? What should I do?”  An urge started to creep up from the pit of my stomach: the urge to cry.  Now, I’m not emotionally repressed, nor do I try to run away from my feelings: but the tears, waiting patiently behind the barrier of my eyelids, weren’t tears of anger, frustration or even pain – they were tears of hopelessness; and, as such, they would serve me no other purpose than to generate more feelings of said hopelessness.  Bodily pain be damned, I knew I had to stop those tears.  I had to find a ‘happy place’ and park my mind right in it.

I had spent a great (if somewhat cold) weekend watching the Streatham Redskins beat the Invicta Dynamos in both legs of the NIHL South cup semi-final; so my first thought was to replay some of the on-ice action, in my head.  I began with Nick Chinn’s hat-trick goal from the Sunday match – a goal made all the more sweeter by the fact that sheer desperation led Invicta to pull their net minder in order to have an extra man on the ice (hindsight, eh…?)  And that’s when it happened: first a ripple, a swell then a veritable tide of calm rolled over my entire body.  I kept my focus on the ice and practically felt my nervous system reset and remember what it was supposed to be doing.  It was like being instantly transported from a Primark sale to a Zen Garden.  My leg released its weird grip, and my endocrine system was finally able to utilise the Melatonin I had taken.

Before anybody misinterprets this, I am not saying that Ice Hockey sent me to sleep!  What I am saying is that the thought of Ice Hockey was enough to relax my over-excited nervous system to the point where a serious muscle spasm simply melted away. I had long suspected that Ice Hockey was boosting more than my adrenals, as other exhilarating sports (such as Roller Derby and Moto GP)  had never come close to having a similar effect.  And being the eternally curious nosey parker that I am, I had to discover if I could get a glimpse at the whole picture. 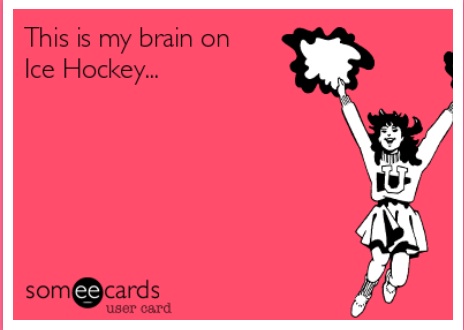 I typed ’neurotransmitters and happiness’ into the search engine and was led to an article, in Psychology Today, that listed the main neurological chemicals that were directly linked to mood elevation.  All I had to do was work through that list until I found the one that most closely matched my experience.  My initial thought, after my unusual night, was that I must have had an increase in Oxytocin (yep, the ‘love hormone’) but, as I wasn’t pawing the team on a regular basis, it was highly unlikely that this was the chemical that had relaxed me.  Endorphins fitted some of the pain killing criteria, but didn’t explain the wave of bliss.  However, GABA ticked all the right boxes. “GABA is an inhibitory molecule that slows down the firing of neurons and creates a sense of calmness” – Christopher Bergland, Psychology Today.  That was exactly what had happened – and at an incredible speed, too.  Apparently the problem that Fibromyalgia sufferers have is not too little GABA, but too much of its brain stimulating opposite, Glutamate.  By focussing on the team I had allowed my brain to create its own Valium and balance out the excess of the original version of Ritalin.

As GABA is available as a supplement, the simple answer would appear to be to start taking it in pill form.  The problem occurs, though, when it is understood that it’s almost impossible to tell how much needs to be taken, and for how long: particularly for someone whose brain chemicals are already out of balance.  In addition, it is possible to overdose, on this substance, with three of the four most common side effects being conditions I already have issues with (shortness of breath, increased blood pressure, increased heart rate, vivid nightmares).  Add to the mix the fact that I’m already meddling with my brain chemistry with both DMAE and Melatonin, and supplementation seems like a somewhat unwise choice.  So what would be the best plan of action?

At the top of the article I touched briefly on the idea that there may be a sea change happening in the treatment of Fibromyalgia – after all, what can a Rheumatologist really do if the symptoms of Fibromyalgia come more from the brain and the spinal cord than they do from the immune system?  So, perhaps there is research being carried out that can help sufferers to re-wire their brains, and keep them in balance long enough for the symptoms to subside; without taking a bucket load of medications and supplements.  This could possibly mean that treatments would have to be detailed and individually tailored to each patient – the ‘one size fits all’ method would have to be discarded completely.  But until that time (if it ever comes), patients like myself will have to take a ‘whatever works’ attitude to their own wellbeing. So, perhaps while I’m waiting for this paradigm shift to occur,  I should consider sleeping with a puck under my pillow.

One thought on “Better Living Through (Neuro) Chemistry”